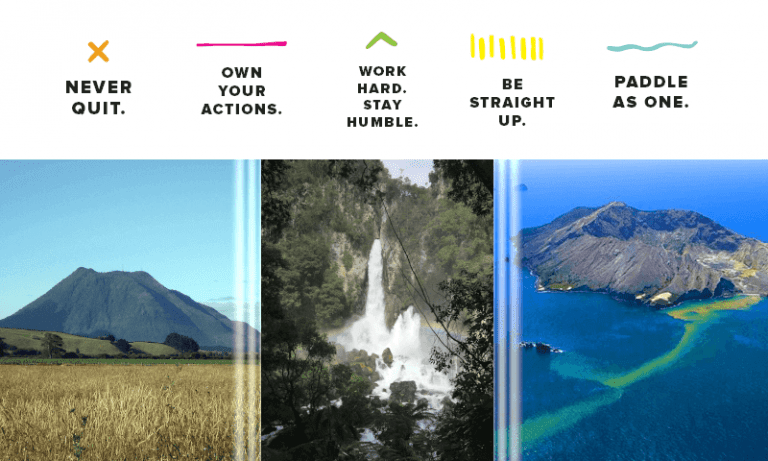 At Sequal, we’re really passionate about our region, its history and giving more to the future. Late last year we set about changing our shift names to better align with who we are, where we are and what we stand for/our values.

With Kawerau being one of the youngest towns in New Zealand, it’s important that we remember the history of the region as we lie nestled within the Tarawera Valley at the foot of Mount Pūtauaki, in the heart of the Bay of Plenty.

According to Māori legend, long ago Pūtauaki lived with his wife Tarawera, a mountain upstream. After years of married happiness, Pūtauaki’s roving eye caught sight of Whakaari (White Island), an enchanting lady who enticed him with her puffs of smoke. So much so that one night, Pūtauaki deserted his wife and went to Whakaari. Cautiously he tiptoed away, but one of his children heard and followed him. They asked where he was going, but feeling ashamed of his plans, he did not answer. All night, the child tugged at him. This made travelling dreadfully slow—so slow that the sun caught him where he now stands (as it is believed that a mountain can only move once in its life and only at night). He looked back and saw his wife weeping for him which made him more ashamed. He could not go forward and he could not go back; so he stayed where he still lies, with his child (the foothill to Pūtauaki). Tarawera still weeps for him and her tears form the Tarawera River.

When coming up with names, the team thought about what was important to us and came up with shift names that reflect our values and why we do what we do for our customers – whilst at the same time, honouring a little piece of history and culture in our region.

In the Greenmill, one of the shifts is now named ‘Pūtauaki’ which represents the mountain that stands strong behind us – signifying identity and belonging – as a team we need to ‘paddle as one’.

The other is called ‘Tarawera’ which symbolises the river that flows alongside us and out to the sea. Likened to our product being delivered around the world – we need to ‘own our actions’ so that we make this possible for our customers.

In the Drymill, the shift is now referred to as ‘Whakaari’ meaning “that which can be made visible”. This refers to the post-production process which is what is visible to our customers (we need to ‘work hard, stay humble’, ‘never quit’ and ‘be straight up’ so we can ensure continuous improvement).

Special thanks must go to our team for their considerable contributions to ‘own their actions’ and establish new shift names that not only reflect what we stand for but also reinforce our values – the qualities we strive to live every single day.

Back
Previous Post
Here’s to 2018 and bringing our give more beliefs to life!
Next Post
Two Sequalians first to hit the 10 year mark for 2018
Menu
Open chat
Talk to us
Powered by
Hello ?
How can we help?